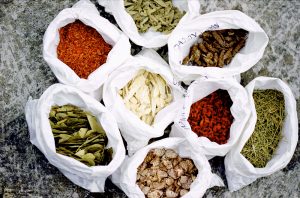 When we talk about Traditional Chinese Medicine (TCM), most people know about acupuncture. However, there are a number of other healing therapies that come under the umbrella of TCM, and one of the most commonly used is herbal medicine. The Chinese herbal medicine is thousands of years old, and ancient texts describe how herbs, roots, grains, fruits, vegetables, animal parts, and minerals have been used to heal. Over the centuries, herbal medicine has been refined, the actions of each herb has been studied, and the chemical components of individual herbs have been broken down so we have a clear understanding of their properties.

According to Chinese theory, each herb has specific actions. Each has an inherent temperature and how the herb affects your body. Herbs are prescribed to treat a pattern of imbalance, which is considered to be the source of your symptoms. For example, if you were having trouble sleeping because you were hot and irritable, you would likely be prescribed cool and calming herbs rather than just herbs to make you sleep. Some examples of commonly prescribed herbs and their actions include:

The action of Dang Gui is to improve the nourishing quality of your blood, and might be used in patterns that cause irregular menstrual periods, anemia, dizziness, or light-headedness. This herb also helps to move sluggish blood that’s responsible for menstrual cramps, endometriosis, stabbing pain, or large bruises.

This is a very bitter and cooling herb that’s used for patterns that involve heat and infections. If you had a very high fever, a severe sore throat, or a skin or intestinal infection, you might be prescribed Huang Lian.

While Huang Lian is chosen for conditions with a high fever, Chai Hu would be prescribed if you had an illness with alternating fevers and chills. Traditionally Chai Hu was used in formulas to treat malaria. This herb is also a good choice if the source of your symptoms is stress-related, or if stress is causing you to have digestive problems. In Traditional Chinese medicine, we would also say that Chai Hu is also used for turning the pivot and supporting the movement of liver Qi. Simplistically, both of which are about circulation and support of your internal energy.

In Chinese medicine, herbs are almost always combined in groups called formulas. This is done for a couple of reasons. First, no single herb has all the desired actions to completely address every symptom and nuance of your unique pattern of disharmony. Second, herbs are used for how they interact with the other herbs in a formula. An herb may be added to strengthen the effects of the main herb, to offset the potency of an herb, or to minimize the side effects of another herb in the formula. Third, a formula may be prescribed to treat more than one underlying pattern, or condition, which would require the inclusion of other herbs. And finally, an herb may be added to a formula to address a specific symptom, such as itching, nasal congestion or pain.

This combining of herbs into formulas is different from the Western or naturopathic philosophy, in which one herb is usually used for a single purpose or symptom, regardless of the underlying pattern. For example, Echinacea may used to boost your immune system, Gingko is taken to enhance your memory, and St. John’s Wort is often used to treat depression.

In addition, a number of Western medications are derived from herbs. For example, aspirin is made from willow bark, morphine is made from poppies, and the antihistamine ephedrine is made from ephedra. However, these drugs are made by isolating one or two specific compounds in the herb. This creates a drug, but it loses the synergistic properties of the entire plant. The end result is a medication that is potent and works quickly, but often comes with a host of negative side-effects.

How to Take Chinese Herbs

Chinese herbs are carefully processed to eliminate additives, to reduce side-effects, and to increase potency. Processing also alters the properties of an herb, when necessary. For example, a toxic herb may be rendered safe after processing, or the actions of a dried herb is different than when it’s fresh. And while you may think of an herb as the leafy part of a plant, many herbs are made from the flowers, bark, twigs, roots, or rhizome of a plant. In that case, processing makes it easier to store and prepare the herb for final use.

Herbs can be taken in many forms, including:

The bottom line is that there are a number of good reasons to take Chinese herbs. Because they are prescribed as a formula, each combination of herbs can be tailored to your specific needs. Your formula can be adjusted as your condition or symptoms change. Like acupuncture, Chinese herbs are designed to treat the source of your condition, not just your symptoms. And herbs are effective; so much so that many have been adapted into Western medications. If you want to know more about how Chinese herbal medicine can help you, please contact us.