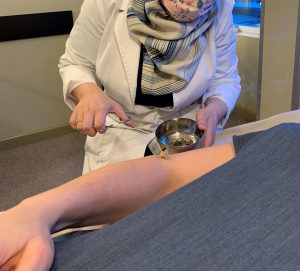 In a previous post we introduced Moxibustion Therapy, which is an ancient yet 100% pure modality of healing. There is something rather mystically mesmerizing and relaxing about the Moxa smoke burning slowly and swirling in the atmosphere around you. At least, this is what my patients tell me! The feeling of Moxibustion creates a sense of comforting warmth, and the smell is genuinely earthy and quite soothing. Nonetheless, Moxibustion can easily be considered as a hidden power under the sleeve of a keen practitioner, and with so many versatile ways to use it, the possibilities of what it treats are endless!

Moxibustion has the ability to invigorate the circulation of Blood and Qi (vitality within each one of us), it can very well strengthen any tissue or organ inside us, and it has the power to eliminate pathogenic factors that cause imbalances and diseases, which, according to Traditional Chinese Medicine are cold, wind, dampness, heat and/or a combination. Through a thorough diagnostic process called “pattern differentiation,” TCM practitioners analyze a patient’s signs and symptoms, as well as tongue and pulse, and deduce the pathogenic factor(s) causing a given disease and or imbalance. Traditional Chinese Medicine always strives to treat the symptoms and the root cause.

Arthritis, for instance, is a common inflammatory disease, though in some cases it is an auto-immune disease, resulting in Rheumatoid Arthritis. However, according to Traditional Chinese Medicine, the concept of “pattern differentiation” is also in place to pinpoint exactly which pathogenic factor is the culprit to the disease. Put simply, TCM classifies all arthritis to be a type of syndrome called “Blockage Syndrome / Bi Syndrome”. Pathogenic factors such as those mentioned earlier stagnate in the body and over time they manifest in pain, swelling, tenderness and inflammation. Moxibustion, in conjunction with acupuncture as well as TCM Nutritional Therapy, has resulted in effective management as well as treatment of various cases of arthritis.

One might argue that if Moxibustion is a warming modality, why on earth would it be used on an active site of inflammation? Of course, the Traditional Chinese Medicine approach is to tackle the enemy from several directions! I personally use the balance method, the distal method and even the local method when treating my patients. I educate them briefly on what each of these methods mean for their personalized treatment and with regards to the use of Moxa to battle either heat and/or inflammation, I say it is highly effective in using it at distal points, especially along the back (Du Meridian/Taiyang Bladder Meridian) as they contain strengthening characteristics for the entire body!

If you or anyone you know is suffering from arthritis, kindly consider receiving Moxibustion and Acupuncture therapy. It could be life-changing!

Faith Belhacene is a Registered Acupuncturist in Vancouver.