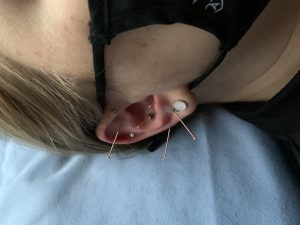 At BodaHealth, we’re committed to offering a variety of safe and natural healing therapies. One of those therapies includes ear (or auricular) acupuncture and acupressure. While ear acupuncture isn’t as well-known as body acupuncture, it’s an effective form of Eastern healing.

Ear acupuncture is just as it sounds. It involves placing tiny needles on the outside of your ear, based on a map of the body reflected on your ear. For example, if you were having lower back pain, your practitioner might place a needle in the low back point in your ear.

Ear acupuncture is considered to be a microsystem, which means that you treat one part of your body for a condition that has occurred somewhere else. Other microsystems that have been effectively used for healing include foot reflexology, scalp acupuncture, and Korean hand acupuncture. However, gene therapy would also be considered a type of healing microsystem, because a map of your entire body and organ system are reflected in each cell’s DNA.

Records of the early use of ear acupuncture in China date back at least a thousand years. However, it has become more commonly used due to the work of a French neurologist, Dr. Paul Nogier, in the mid 1900’s. His published work and ear maps were adopted by members of the Chinese army who brought Dr. Nogier’s methodology to China. Nogier’s system was used by China’s barefoot doctors, the rural health care workers during Chairman Mao’s Cultural Revolution. Today, ear acupuncture is used by health care providers and acupuncturists throughout the world.

For the best results, our acupuncturists at BodaHealth may choose individual points when performing ear acupuncture or they may employ a protocol that has been developed by other practitioners and found effective for specific conditions. One is called the NADA protocol, which is a five-point procedure developed by the National Addiction Detox Association. It has been found to be effective in recovery from chemical dependency and is also used for smoking cessation, weight loss, stress, anxiety, and PTSD. 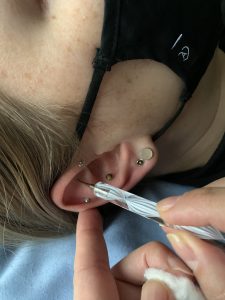 In recent years, ear acupuncture protocols have been used by the U. S. Veteran’s Administration to treat soldiers and veterans with a number of health conditions. The best known is a five-point protocol called battlefield acupuncture (BFA), which was developed by Col. Richard Niemtzow to treat acute and chronic pain among combat veterans. While it’s called Battlefield Acupuncture, it’s not necessarily intended to be used in the heat of a battle. Instead, its name comes from the ease with which it can be used and how fast it works to relieve all kinds of pain.

At BodaHealth, ear acupuncture can be applied as a stand-alone therapy, or it may be combined with a body acupuncture treatment. The needles used in ear acupuncture are usually smaller than body needles. In addition, our practitioners may treat their patients with auricular therapy without the use of needles. They may use a small ear probe to stimulate the ear points, or they may send their patient home with tiny adhesive ear beads or seeds left in place so the points can be stimulated for several days after the treatment.

Interestingly, your ear can also be a source of diagnostic information. Any marks, red or white spots, dry areas, or broken capillaries in your ear can point your practitioner to systems or organs that are out of balance, based on their position in your ear map.

What Can Ear Acupuncture Treat?

At BodaHealth, we offer ear acupuncture to our patients because it can treat a wide variety of health conditions, including:

Ear acupuncture is fairly quick to perform and can be used in conjunction with other healing methods. It’s an effective and versatile therapy. At BodaHealth, we believe that ear acupuncture is a great addition to the healing therapies that we offer. If you’d like to find out more about how ear acupuncture can help you, contact us today.