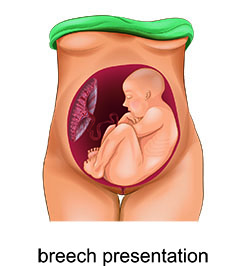 A breech presentation occurs when your baby is in a head up position in your uterus in the later weeks of your pregnancy, so their feet are pointing downward toward the birth canal. Although breech presentations are fairly common, more than 95% of the time the baby will transition to a head down position somewhere between weeks 28 and 32. In most cases, once your baby has turned, they will stay in that position, because their head is heavier than their feet and as they continue to grow, they have less space to move.

We don’t always know why a breech presentation occurs, but there are a number of reasons that may raise your risk of this happening:

For women with a breech presentation the question is how best to safely deliver the baby, and there’s no simple right answer. Breech deliveries carry with them a higher risk for complications than a normally positioned vaginal delivery. For that reason your doctor may recommend a caesarean. However, a caesarean is major surgery and is also associated with a risk for complications, especially for the mother.

While you may be encouraged to have a caesarean birth if your baby is in the breech position, a vaginal birth may be possible. This will depend on a number of factors, such as the type of breech position (one foot, both feet, or buttocks delivered first) and the skill and training of your doctor or midwife.

Can You Turn a Breech Baby?

Your doctor or midwife may recommend something called external cephalic version, or ECV, to move your baby into a headfirst or head down position. This occurs while your baby is still in the uterus through pressure applied to your abdomen. The ECV procedure is done in a hospital so you and your baby can be monitored for complications, and is successful in repositioning your baby about half the time.

Another method that women with breech babies may try is called inversion, which is simply elevating your pelvis to encourage your baby to change position. Examples of inversion include elevating your hips with a pillow, laying feet up on a slanted board, or kneeling with your head lower than your hips.

At BodaHealth, we have a kinder, gentle way to help turn your breech positioned baby, which is through a combination of acupuncture and moxabustion. Moxabustion is a healing method that’s falls under the umbrella of Chinese medicine. It’s an age-old way of applying heat and can be used as a stand-alone treatment or in combination with acupuncture or other treatments. Moxabustion involves warming points on your body by burning the herb, artemesia (also called mugwort or Ai Ye) that’s been compressed and rolled into a long stick. It’s considered to be both warming and drying. This kind of heat is also very moving, which is why it’s a common way to turn an improperly positioned baby in Chinese medicine.

At BodaHealth, treatments for breech presentation involves acupuncture on specific body points to release tension, loosen your muscles, open up your pelvic joints, and help you relax overall. Our goal is to relieve any stress or tension that may prevent your baby from shifting to a head down position.

In combination with acupuncture, moxabustion is also an essential part of your treatment. One of our BodaHealth practitioners will apply heat, by passing a warm moxa stick that looks something like a large crayon near a point at the side of your little toe. Using moxabustion on this point is a well-known treatment for breech presentations, and causes your baby to increase its movements and in many cases change position entirely. In between treatments, your practitioner will teach you how to do daily moxabustion sessions at home and suggest positioning exercises to help turn your baby.

If you’re approaching the last weeks of your pregnancy with a breech presentation, you may not have to choose between having a caesarean or a breech delivery. In many cases, through the use of acupuncture and moxabustion, BodaHealth’s practitioners can help reposition your baby safely and naturally.